Knee pain: what are the experts saying?

Patellofemoral pain (PFP) is among the most common running injuries; no surprise it’s being called Runner’s knee! Jean-Francois Esculier from The Running Clinic was fortunate enough to attend and present his work at the latest Patellofemoral Pain Research Retreat and Clinical Symposium which recently took place in Brisbane, Australia.

New treatment approaches and new assessment techniques were exposed. It was also a good occasion to debate on where future research should be headed, and what healthcare professionals should focus on when treating patients with PFP. Just like at the previous meeting in Manchester, UK in 2015, debates took place between experts from different backgrounds and points of view.

Historically, PFP has been considered as a “biomechanical issue” requiring treatment approaches focusing on knee alignment. Such reasoning laid the foundation for specific training of the vastus medialis muscle (inner thigh) to influence patellar tracking, exercises to maintain proper alignment, foot orthoses and knee taping and bracing. However, advances in pain science along with consideration of psychosocial factors and patient education on appropriate management of activities have gradually invited themselves to the last three meetings on PFP.

For example, a recent Danish study (not yet published) conducted in adolescents with PFP suggests that pain at sites other than the knee (e.g. back, shoulder, shin) is frequent in that age group, and predicts poorer outcome five years down the road. This certainly questions the biomechanical model, at least in that age group. More research from the same team, led by Dr Michael Rathleff, suggests that most adolescents with PFP deemed themselves recovered following 12 weeks of intervention focusing on education regarding appropriate management of training loads and progression based on pain levels, combined with an exercise program. No orthoses, no movement retraining, no brace or taping… but ensuring proper understanding of how they should modify their activities on the short-term, before gradually building their way back up to higher levels of activity or sports based on their level of symptoms.

Such improvement in knee pain using sound education is in line with results from a recent randomized clinical trial published by our research group. In this study, we randomly assigned 69 runners with PFP to one of 3 groups among:

The effects of the different programs were assessed using questionnaires on symptoms and functional limitations. And… surprisingly, all three groups showed similar improvements! The figure below depicts the evolution of scores to the KOS-ADLS questionnaire (maximum score is 100, which indicates the absence of symptoms) and pain scales (0-10, where 0 is no pain and 10 is the worst pain imaginable) for usual pain (VAS-U), worst pain (VAS-W) and pain during running (VAS-R). 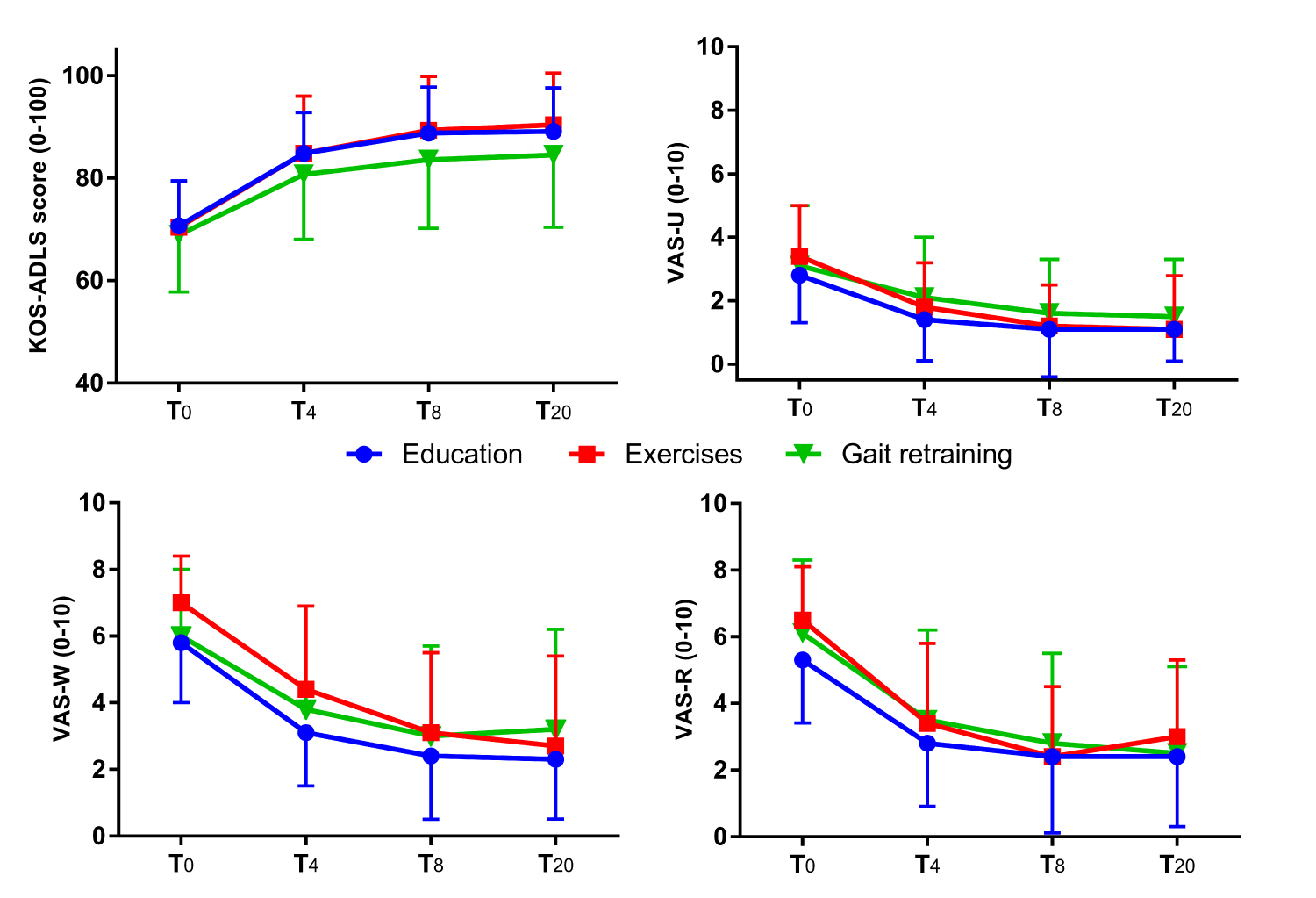 The different treatment approaches compared in our study were a major focus of the Clinical Symposium on PFP in Australia, which ended by a debate (sometimes heated) between proponents of education, exercises and gait retraining about which component should be addressed as a priority in runners with PFP. Some experts positioned themselves as strong advocates of movement retraining, whether by using strengthening and lower limb control exercises or by running gait retraining. Their rationale consisted in reductions of joint stress by restoring “optimal” lower limb mechanics, since they believe faulty movement patterns represent the main cause of PFP.

Unfortunately, we strongly disagree and believe that this very “mechanistic” vision lacks ecological validity by ignoring (1) all runners out there who are not injured despite exhibiting atypical mechanics and (2) runners with good alignment who also sustain injuries. What if PFP resulted from recent increases in training loads? Or from decreased capacity to sustain loads that are usually well tolerated by the body, for example because of stress at work or recent lack of sleep? Education on such factors and on how to manage training loads according to symptoms is much more likely to help the patient, and should definitely represent treatment priority. Of course, exercises and gait retraining are useful and appropriate and well supported by research, but let’s just not forget common sense regardless of the number of years we spent studying complex concepts during professional training… and include appropriate education in the treatment plan! 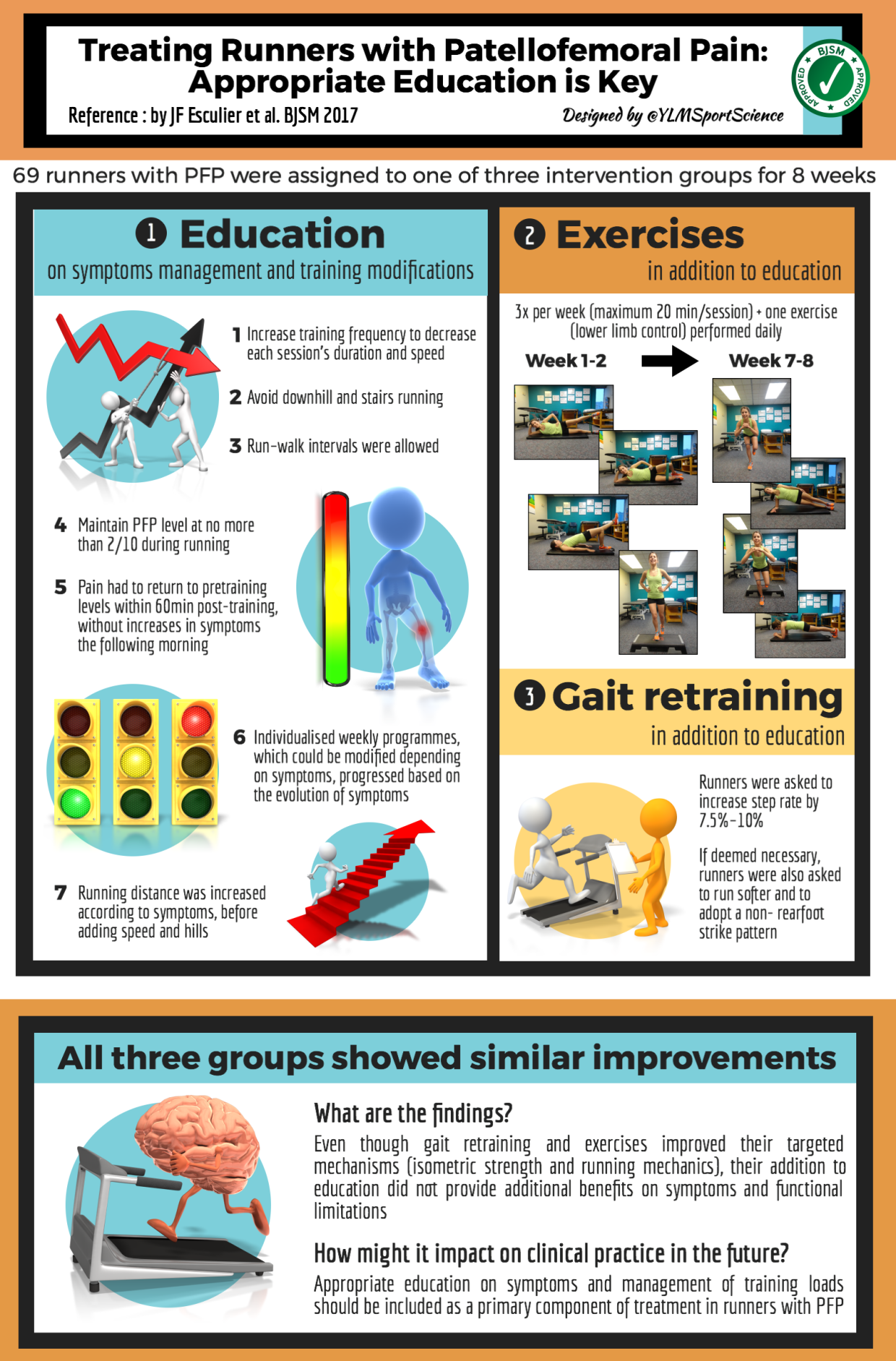 Interesting findings from the conference

For those healthcare practitioners who are interested in learning more, here are a few key clinical findings that were reported during the meeting, …

Exercises, tapings, and much more!

Description of our courses