Chamonix is mostly known for skiing. And I discovered it for trail running.

Here, we’re talking more about a large village. Very popular as a tourist attraction, its main street is full of shops and stores that you could actually see on Sainte-Catherine Street in Montréal.

However, as you look up and see Mont-Blanc’s snow-covered pinnacles, you suddenly find yourself elsewhere. 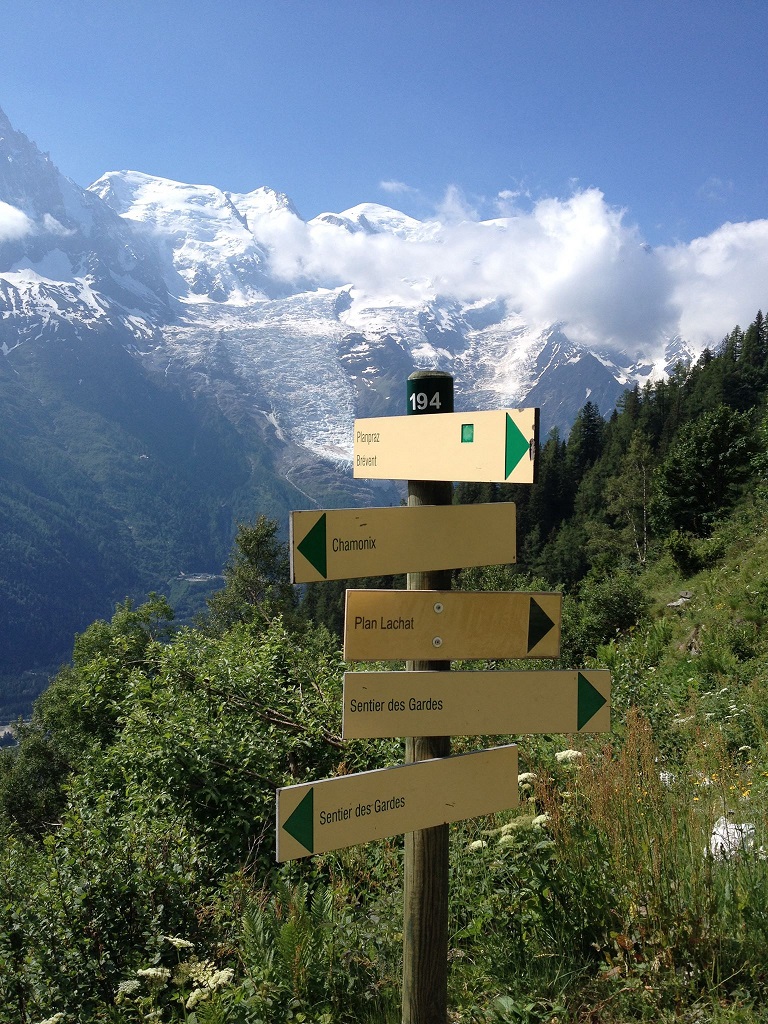 The first thing I thought when I got there: where could I go for a jog to get my legs moving? First option, Le Brévent (2,525 m), or Grand Balcon Nord : Plan de l'Aiguille du Midi (roughly the same altitude). So, basically, you have two choices: a vertical km, or a vertical km... a rather easy choice!

Chamonix is also surrounded by countless walking trails, both for hiking and running, which trail runners relish because of their diversity, elevation and technical nature.

The UTMB: an iconic race in the world of trail running

The Ultra-Trail du Mont Blanc, the ultra-trail world tour’s flagship event, will present its 16th edition this year. You could almost say that it's the trail running world championship, or at the very least, the most prestigious race of the tour. I quickly realized that Chamonix was not going to miss out on such an opportunity to welcome, year in and year out, thousands of runners. Prices are apparently steeper in the week preceding the UTMB, so much so that it has become the “high season.”

The UTMB Expo is full of retailers and suppliers showcasing everything there is out there on the trail running market... I mean everything! I naively thought that trail running stood out by its simplicity: running shoes, a mountain, and that was it. It quickly hit me that, on the contrary, new products and new technologies were a dime a dozen. New watches with prolonged battery life, lighter sticks, lighter clothes, and shoes... my God, shoes that are ever more cushioned! We could talk even more about shoes, but this could be the subject of another post!

In short, the UTMB is a gathering of athletes, coaches and trail enthusiasts!

Hotels, restaurants and streets are filled with people, ready to pay top dollar to hit the various courses of the events proposed by the UTMB.

The organization was able to transform a mere race into a major event, for which, in order to participate, runners need to earn points and hope for a favorable draw. Some would say that it has become a real “business,” at the expense of athletes and the values promoted by the sport. Personally, I don’t have anything against the mercantile aspect of sports events. Although, here I'm not talking about access, which should be, in my humble opinion, universal and at a low cost. If 2,500 people are willing to pay 250 euros to participate and there is a waiting list of 15,000 people every year, then great. That means they were able to develop a quality product!

Still, I was surprised at the fact that winners only get a measly 2,000 euros. For a 170 km event, really? No wonder most top seeds don’t hesitate to withdraw from the race if victory is no longer within their reach. As a matter of fact, in 2018, 8 out of 10 favorites gave up along the way...

Behind the scenes of an ultra trail, between emotions and solidarity

We even had the opportunity to support a friend, Yanick Normandeau, who was participating in the UTMB for the very first time. The support team can come in to help at the five (5) filling stations set up throughout the race. It was an exceptional experience. We were able to see the best athletes in action, recognize some sections of the course, observe from the inside the emotions that can arise at different times of this endless race. Would we actually want to participate in the event? Not really! Maybe in 2 years?

Finally, although Chamonix is a beautiful village, it’s what surrounds it that’s really worth it!